First Wednesday of every month at 7:00 pm.
Join a member of our clergy at the next bible study. Bible on Tap is an opportunity to look at the week’s lectionary readings and other special topics, share a pint, talk theology and enjoy some fellowship together.

The Reading Circle is a book discussion group for women in the parish and community. We discuss a wide variety of books, both fiction and nonfiction. Meetings are held on the second Wednesday of the month, September through June.  See our events calendar for upcoming books.

Movies with Meaning:
Not Just Your Ordinary Night Out

Following the movie, a lively and engaging discussion is held. To register, please contact the office (office@allsaintswestboro.com). Please check our calendar for information on the current movie. See you at the movies! 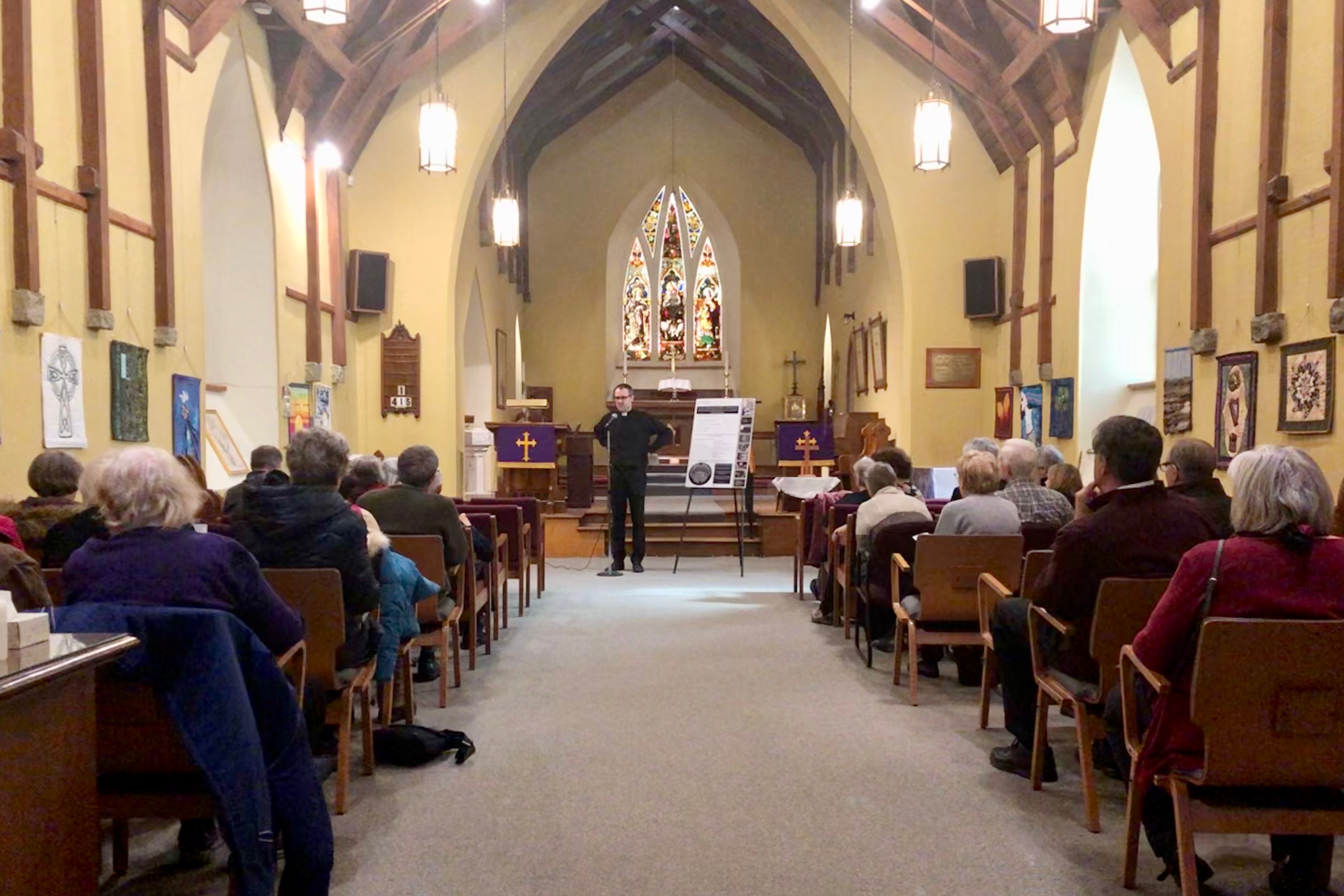 We offer occasional Parish At Learning (PAL) sessions in the chapel following the morning Eucharist (usually between September and May). All parishioners are invited to the sessions that begin at 11.15 am and end no later than 12.30 pm.

PAL hours are a project in Adult Education with a variety of presenters. The central purpose is to raise awareness about some of the social issues of our day and ministries provided by our diocese. The sessions also give some of our members a chance to speak about the about the work they do during the week.

Ongoing at All Saints’ Westboro

Healing Forest — On October 13th, 2019, Grandmother Francine helped us to bless the small Healing Forest on the east lawn near the main doors to the church.  An initiative of the children of All Saints’ Westboro, the children from both Churches joined in the ceremony by adding the last stones to the pathway and by expressing their prayerful intentions with a tobacco offering.  Participants then sang together with Grandmother Francine, with beautiful sunshine streaming down among the gently falling leaves.  Patricia Stirbys was with us, representing the Healing Forest Initiative and welcoming our small site to join with other forests across the country, dedicated to reconciliation of First Nations and settler people.  This space is defined by a Grandmother/Grandfather Rock that a seating area while we mediate or pray for solace and courage as we look to reconciliation of First People communities with colonizing communities around the world.  Feel free to come and make use of this lovely site.

Resource Table — Stop by to see resources or chat with a member of the Truth & Reconciliation Team, in Steacy Hall during coffee hour following the 9:30 a.m. service.

Resources to Read, Listen to, or Watch in Support of Right Relations with the Aboriginal Peoples of Canada

Here are some possible films to view – all previewed by members of our team — from the National Film Board of Canada, with reviews included.  All can be found on the following website: www.nfb.ca/documentary.

* Redskins, Tricksters and Puppy Stew
54 mins., Drew Hayden Taylor, 2014
This film shines a light on Indigenous humour, a part of Indigenous culture that is often overlooked. It is funny, and informative while it examines complex issues such as identity, politics and racism.

* Our People Will Be Healed
1 hr. 37 mins.,  Alanis Obomsawin, 2017
This is the story of a Cree Community in Norway House (north of Winnipeg).  It centres around the Helen Betty Osborne Educational Resource Centre which provides schooling from Kindergarten to Grade 12 for all students in the community, to develop their abilities and sense of pride.  Teaching occurs in the classroom and the great outdoors.

It is a film that shows how outcomes can change for the better when sufficient educational funding is provided and when students can develop their abilities and a sense of pride.

* Trick or Treaty
1 hr. 24 mins.,  Alanis Obomsawin, 2014
Time went quickly as I learned about Treaty 9, that covers a great area of Northern Quebec and Ontario.  There is a difference between what it says and what was explained according to the ancestors of the Indigenous people that put their mark on the document in 1905.  The work of Idle No More, Chief Theresa Spence’s protest and the walk of the 6 young men from Northern Quebec to Ottawa are covered in beautiful and moving cinematography.

* Birth of a Family
1 hr. 19 mins., Tasha Hubbard, 2016
In this deeply moving feature-length documentary, three sisters and a brother meet for the first time.  Betty Ann, Esther, Rosalie and Ben were only four of 20,000 Indigenous Canadian children taken from their families between 1955 and 1985 (the infamous Sixties Scoop), to be either adopted into white families or live in foster care.  As the four siblings piece together their shared history in this bittersweet film, their connection deepens, and their family begins to take shape.

* Edna’s Bloodline
58 mins., Eva Wunderman, 2017
Edna Elias, former Commissioner of Nunavut, is a great-gradndaughter of Petter Norberg, a Swede who came to Northern canada as a young man and worked in the fur trade.  The documentary tells the sotry of Norberg’s life through the visit of Edna’s Swedish cousins to Kugluktuk.
Available on TVO at https://www.tvo.org/video/documentaries/ednas-bloodline

* nipawistamasowin: We Will Stand Up
52 mins., Tasha Hubbard, 2019
Following the shooting of Colten Boushie by a Saskatchewan farmer, this film follows his family’s pursuit of justice and raises questions about racism embedded in Canada’s justice system. (can be viewed on GEM for free)

Events not organized or sponsored by ASW that may be of interest.

This interesting 3 part series has finished, but the audio and visual are both available online here.